The Thirteen Colonies were a group of British colonies on the east coast of North America founded in the 16th and 17th centuries that declared independence in 1776 and formed the United States.

The colonies were started for a few reasons. Some people thought they would make a lot of money in new goods in America that could not be found in Europe, such as tobacco. Others left to find freedom of religion or just to make a new start.

Contemporary documents usually list the thirteen colonies of British North America in geographical order, from the north to the south, and classify them as the New England colonies, the Middle colonies, and the Southern colonies.

Jamestown was the first of the 13 colonies after the failure to establish a colony on Roanoke Island. Jamestown was mainly founded for the purpose of making money. Late in 1606, English entrepreneurs set sail with a charter from the Virginia Company of London. The fleet consisted of the three ships, named Susan Constant, Discovery, and Godspeed, under Captain Christopher Newport. After a particularly long voyage of four months including a stop in Puerto Rico, they finally departed for the American mainland on April 10, 1607. The expedition made landfall on April 26, 1607 at a place they named Cape Henry. Under orders to select a more secure location, they set about exploring what is now Hampton Roads and an outlet into the Chesapeake Bay they named the James River in honor of their king, James I of England.

They settled on Jamestown Island along the James River and founded Jamestown on May 13, 1607. The settlers had many problems. They built their town near a swamp. Many insects lived around the swampy land and the insects gave them diseases. The site was too poor and remote for agriculture, they arrived too late in the year to get crops planted, and the brackish tidal river water was unsuitable for drinking.

Famine, disease and conflict with local Native American tribes (the Powhatan Confederacy) in the first two years brought Jamestown to the brink of failure.

During the harsh winter of 1609, most of the people of Jamestown ended up dying and the remaining starving settlers resorted to cannibalism. Only 60 of the original 214 settlers at Jamestown survived and only because Native Americans living in the area came to their aid with food.

After a supply ship arrived the next year they had additional provisions but many more colonists to feed as well. Once again, over the winter, most of the colonists died of starvation and from hostile encounters with their neighbors. As winter came to a close, ships arrived, and the colonists were ready to leave. But as they were descending the James River, Lord Thomas de la Warr arrived from England with new supplies and more settlers. He refused to let the survivors return to England. All the settlers returned to the colony, though there was still a critical shortage of food. Slowly, as they reached agreements with the local Native American tribes and they learned how to grow some of their own crops, the colony began to prosper.

Once the money started flowing in regularly, the Jamestown colony grew, as did other settlements in Virginia and in other states along the eastern seaboard. Tobacco became Virginia’s first profitable export, and a period of peace followed the marriage of colonist John Rolfe to Pocahontas, the daughter of an Algonquian chief. In 1619, the first representative Assembly in Virginia was held at Jamestown. This assembly formed the foundation of what would become the State of Virginia.

The year 1619 also saw another significant development: the first arrival of black workers on boats from Africa. These men and women were originally indentured servants, who worked a plot of land for a few years and then got to keep the land as owners. (The slave trade didn't get into full swing in this part of America until the 1680s.)


Cause and Effect of the American Revolution

The Thirteen Colonies had very similar political, constitutional and legal systems, and were dominated by Protestant English-speakers. Each group of colonies had its unique aspects in many areas, from architecture to economics. They all had a common goal: to govern themselves and to have a say in how they were represented.

In the 1750s the colonies began collaborating with each other, instead of dealing directly with Britain which cultivated a sense of shared American identity.

The American Revolution was caused by events that affected both the patriots of America and the loyalists of Britain. Before the American Revolution, small upheavals in individual states were seen throughout the country. Among these were the French and Indian War. This war spanned nine years, but it was known in England as the Seven Years War. It was a clear picture of how the Frenchmen and the Englishmen both wanted supreme power over the lands of America and wanted to become masters of the trade that each represented. The war was fought between the colonies of British America and New France, with both sides supported by military units from their parent countries of Great Britain and France, as well as Native American allies.

France lost the war in 1763, and England imposed the Stamp Act on all written documents in America to be able to pay debts incurred during the war. They put taxes on virtually everything, including paper, tea, glass and paint. These tax issues then led to the American Revolution ten years later.

Trouble escalated especially over the tea tax, as Americans in each colony boycotted the tea and in Boston dumped the tea in the harbor during the Boston Tea Party in 1773. Following a series of protests, the colonies united politically and militarily in opposition to the British government and fought the American Revolutionary War, 1775–1783.

By spring 1775 all royal officials had been expelled from all thirteen colonies. The Continental Congress was the national government. It raised an army to fight the British and named George Washington its commander.

In July 1776, they formed a new nation called the "United States of America," and declared independence. They had ultimately determined that the British rule would never again gain their allegiance, thus severing any ties to the English crown.The new nation achieved that goal by winning the American Revolutionary War with the aid of France, the Netherlands and Spain.

At the time of the war Britain had seven other colonies on the Atlantic coast of North America: Newfoundland, Rupert's Land, Nova Scotia, Prince Edward Island, East Florida, West Florida, and the Province of Quebec. There were other colonies in the Americas as well, largely in the British West Indies. Some of these colonies were considered "passive allies" of the United States throughout the war, some of them were tightly bound to Britain or controlled by the Royal Navy and remained loyal to the crown.

By 1776 about 85% of the white population was of English, Irish, Scottish or Welsh descent, with 9% of German origin and 4% Dutch.
Slavery was legal and practiced in each of the Thirteen Colonies. In most places it involved house servants or farm workers. It was of economic importance in the export-oriented tobacco plantations of Virginia and Maryland, and the rice and indigo plantations of South Carolina. About 287,000 slaves were imported into the Thirteen Colonies. 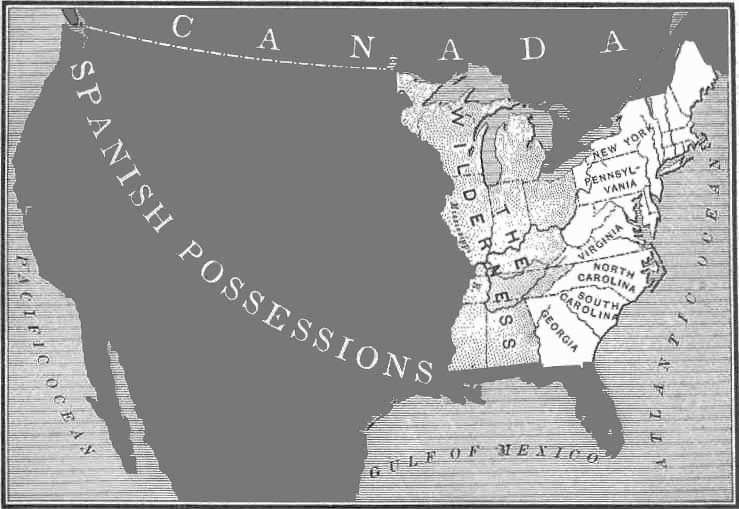 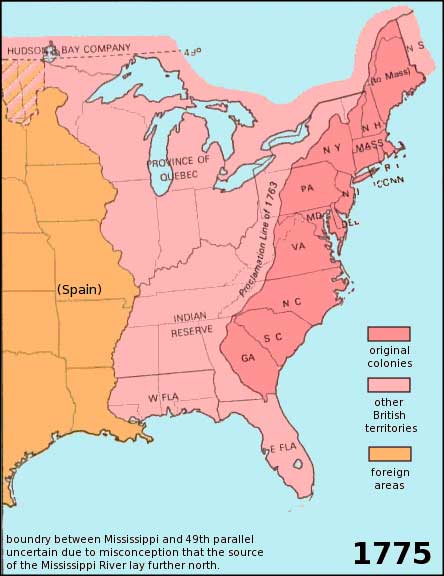