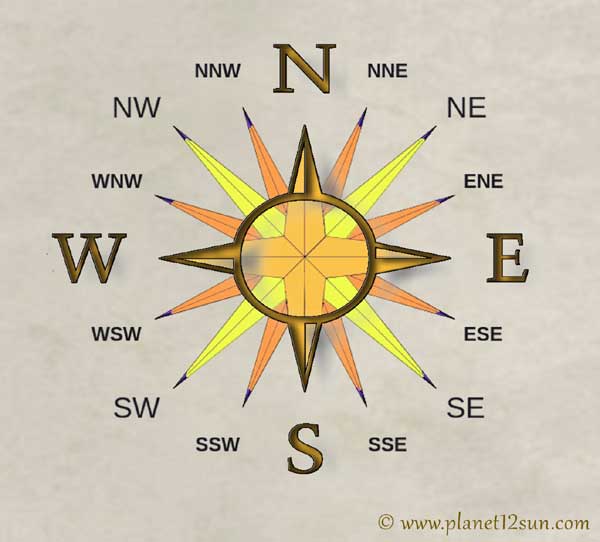 The four cardinal directions or cardinal points are the directions of north, east, south, and west, commonly denoted by their initials: N, E, S, W. East and west are at right angles to north and south, with east being in the clockwise direction of rotation from north and west being directly opposite east.

The intermediate (intercardinal, or ordinal) directions are:

And in between all of those are:

A compass is an instrument used for navigation and orientation that shows direction relative to the geographic cardinal directions. The Earth has a magnetic field which is approximately aligned with its axis of rotation. A magnetic compass is a device that uses this field to determine the cardinal directions. It has a needle that is mounted on a low-friction pivot point, so it can turn easily. Because the needle of a compass is magnetized, it will always point toward magnetic north. The difference between true north and magnetic north differs by as many as 20 degrees in some places. You can correct for declination by either adding or subtracting the declination amount from your bearing in degrees (depending on whether you're in an area with east declination or west declination).

How to Use a Compass

Hold the compass correctly. Place the compass flat in front of your chest so that the compass needle floats freely and points to magnetic north.

If you're consulting a map, place the map on a flat surface and place the compass on the map to get a more accurate reading.

Your compass has a rotating ring around it. You'll see the ring is divided in increments that add up to 360 degrees. Align your map and compass both North, and place your compass over your location on the map. The zero degree mark on the compass housing and the north end of the needle should be aligned - they now point to magnetic north.

Imagine or draw a straight line from the compass center to your destination. The travel line on your compass will show a bearing number. Following that exact bearing will take you to your exact target on the map.