The Parts of Speech

Traditional grammar classifies words based on eight parts of speech: verb, noun, pronoun, adjective, adverb, preposition, conjunction, and interjection.
Each part of speech explains not what the word is, but how the word is used. In fact, the same word can be a noun in one sentence and a verb or adjective in the next!

The verbs which express a state of being are the ones which take a little practice to spot, but, actually, they are the most common. The most common verb is the verb "to be" in the present, past or future tense.

Everything we can see or talk about is represented by a word which names it. That "naming word" is called a noun. A noun is a naming word for a person, a place, an event (party), a substance (water, nitrogen), a quality (heroism, sorrow), actions (jumping, reading, listening) or a thing (book, shoe).

Common nouns -a common noun is the word used for a class of person, place or thing. Common nouns are capitalized only when they start a sentence. (girl, ocean, state, country, cookie, dog...)

Proper nouns -a proper noun is the name of a person, place or thing (i.e., its own name). A proper noun always starts with a capital letter. (Isabella, Atlantic Ocean, Australia, Oreo, Max...)

Adjectives are descriptive words. They are used to describe or give information about things, ideas and people: nouns or pronouns. If you are asked questions with "which, whose, what kind, how many", you need an adjective to be able to answer. The articles "a, an, the" are a special kind of adjective called articles, and the possessives "my, our, your, their.." are sometimes known as possessive adjectives.

Adverbs are used to modify verbs. They tell us "when, where, how, in what manner, to what extent" an action is performed. Adverbs also modify or describe adjectives, such as "the very tall man". They may also modify other adverbs, such as "he ran extremely fast".

In this sentence:
"Maria saw Jack, and then she waved at him",
the pronouns "she" and "him" take the place of Maria and Jack.

There are several different types of pronouns, including:

Examples of common prepositions: of, in, to, for, with, on, at, from, by, about, as, into, like, through, after, over, between, out, against, during, without, before, under, around, among...

A preposition is a word which precedes a noun (or a pronoun) to show the noun's (or the pronoun's) relationship to another word in the sentence. It gives information about location, direction, space, or time.

A word group (such as in front of, or on top of) that functions like a simple, one-word preposition is called a complex preposition.

Conjunction is a word that joins together sentences, clauses, phrases, or words. Conjunctions can be categorized into one of three groupings: coordinating, subordinating, and correlative.

Coordinating conjunctions (for, and, nor, but, or, yet, so) are used to join individual words, phrases, and independent clauses.
examples: cats and dogs, tea or coffee, ugly but smart

Subordinating conjunctions (after, although, as, because, before, if, once, since, than, that, though, till, until, when, where, whether, and while) are used to join an independent and complete clause with a dependent clause that relies on the main clause for meaning and relevance. The dependent clause cannot exist on its own as a sentence and often does not make sense without the main clause.
examples: This is the place where she was last seen. He asked if he could stay longer.

Correlative conjunctions. (both... and, either... or, neither... nor, not only... but also, whether... or) do the same thing that coordinating conjunctions do except that they are always used in pairs. examples: This cake contains neither strawberries nor cherries. It doesn’t matter whether the dress is red or if it is pink, just buy it!


Click on the picture to print the "Parts of Speech" table. 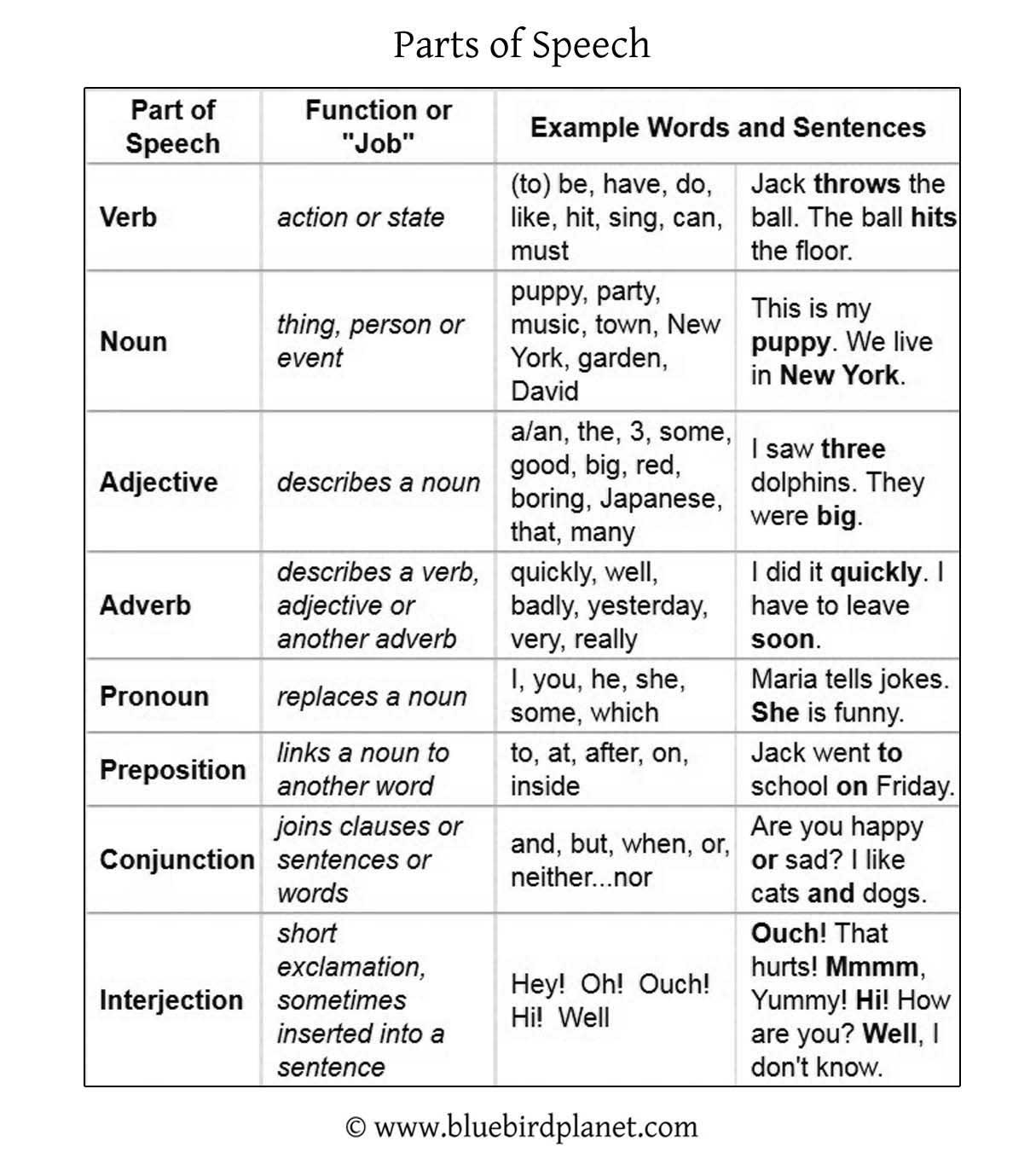