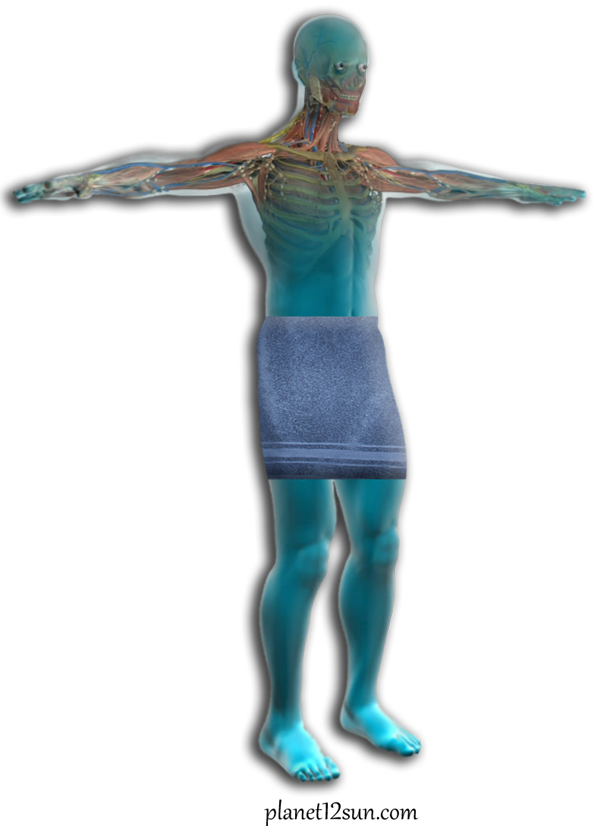 Skeletal structure frames the overall shape of the body and does not alter much over a lifetime. General body shape is influenced by the distribution of muscle and fat tissue and is also affected by various hormones.

A full-grown human has 206 distinct bones. Babies and small children will begin life with more bones in their bodies (over 270). As you grow, your bones begin to fuse together and that's how you end up with fewer bones in adulthood.

The human body is comprised of hundreds of muscles, about 640 in total. Muscles are categorized as one of three different types:
striated (voluntary or skeletal)- these include those in the face and those that move all the bones of the body,
smooth (involuntary or visceral)- these are controlled by the autonomic nervous system; they move internal organs, including the digestive tract and secretory glands,
cardiac- those that make up the heart

Humans have five vital organs that are essential for survival. These are the brain, heart, kidneys, liver, and lungs.

The human brain is the body's control center, receiving and sending signals to other organs through the nervous system and through secreted hormones. It is responsible for our thoughts, feelings, memory storage and general perception of the world.

The heart is responsible for pumping blood throughout our body.

The kidneys remove waste and extra fluid from the blood. The kidneys take urea out of the blood and combine it with water and other substances to make urine.

The liver has many functions, including detoxifying of harmful chemicals, breakdown of drugs, filtering of blood, secretion of bile and production of blood-clotting proteins.

The lungs are responsible for removing oxygen from the air we breathe and transferring it to our blood where it can be sent to our cells. The lungs also remove carbon dioxide, which we exhale.

The sense organs — eyes, ears, tongue, skin, and nose — help to protect the body. The human sense organs are portions of the body enabling information from the outside world to be received through specific receptors that are connected to the brain by the nerves. The five senses are: taste, sight, touch, smell, and hearing.

taste- It is the sensation that a human or animal experiences on the tongue when eating. Usually, there are the tastes of sweet, sour, bitter, spicy, and salty.

sight- The eye is the organ of vision. It has a complex structure consisting of a transparent lens that focuses light on the retina. The eye is connected to the brain through the optic nerve. The back of the brain maps the visual input from the eyes.

touch- Sense enabling the skin to detect sensations (contact, heat, pain and others) due to specialized receptors spread widely over the surface of the body.

smell - Olfaction, also known as olfactics, is the sense of smell. Since the oral and nasal cavities are connected, the olfactory sense affects taste. The human being can distinguish almost 10,000 odors.

Composition of the Human Body

The composition of the human body is made up of a number of certain elements including oxygen, carbon, hydrogen, nitrogen, calcium, and phosphorus. The composition can also be expressed in terms of chemicals, such as:

The average adult body contains between 5 and 5½ litres of blood. Blood is a bodily fluid that delivers necessary substances such as nutrients and oxygen to the cells and transports metabolic waste products away from those same cells. The major components of blood include plasma, red blood cells, white blood cells, and platelets.

Every part of the body is composed of various types of cells. The vast majority of cells (though not the largest mass of cells) in the human body are not human at all; rather they are of bacteria, archaea, and methanogens. The largest proportion of these form the gut flora. The whole population of microbiota include microorganisms of the skin and other body parts and this altogether is termed as the human microbiome.

Homeostasis is a process that maintains the stability of the human body's internal environment in response to changes in external conditions (constant pH, temperature, blood flow, and position).

The human body consists of many interacting systems. Each system contributes to the maintenance of homeostasis, of itself, other systems, and the entire body. Systems do not work in isolation, and the well-being of the person depends upon the well-being of all the interacting body systems. Some combining systems are referred to by their joint names such as the nervous system and the endocrine system known together as the neuroendocrine system.

There are many systems in the human body:

The musculoskeletal system consists of the human skeleton (which includes bones, ligaments, tendons, and cartilage) and attached muscles. It gives the body basic structure and the ability for movement. The larger bones in the body have structural role and contain bone marrow, the site of production of blood cells.

The circulatory system or cardiovascular system comprises the heart and blood vessels (arteries, veins, and capillaries). The heart propels the circulation of the blood, which serves as a "transportation system" to transfer oxygen, fuel, nutrients, waste products, immune cells, and signalling molecules (i.e., hormones) from one part of the body to another.

The respiratory system consists of the nose, nasopharynx, trachea, and lungs. It brings oxygen from the air and excretes carbon dioxide and water back into the air.

The digestive system consists of the mouth including the tongue and teeth, esophagus, stomach, gut (gastrointestinal tract, small and large intestines, and rectum), as well as the liver, pancreas, gallbladder, and salivary glands.

The integumentary system consists of the covering of the body (the skin), including hair and nails as well as other functionally important structures such as the sweat glands and sebaceous glands. The skin provides containment, structure, and protection for other organs and serves as a sensory interface with the outside world.

The urinary system consists of the kidneys, ureters, bladder, and urethra. It removes water from the blood to produce urine, which carries a variety of waste molecules and excess ions and water out of the body.

The immune system consists of the white blood cells, the thymus, lymph nodes and lymph channels, which are also part of the lymphatic system. The immune system provides a mechanism for the body to distinguish its own cells and tissues from alien cells and substances and to neutralize or destroy the latter by using specialized proteins such as antibodies, cytokines, and toll-like receptors, among many others.

The main function of the lymphatic system is to extract, transport and metabolize lymph, the fluid found in between cells.

The endocrine system consists of the principal endocrine glands: the pituitary, thyroid, adrenals, pancreas, parathyroids, and gonads, but nearly all organs and tissues produce specific endocrine hormones as well. The endocrine hormones serve as signals from one body system to another regarding an enormous array of conditions, and resulting in variety of changes of function. There is also the exocrine system ( sweat, salivary, mammary, ceruminous, lacrimal, sebaceous, and mucous gland).